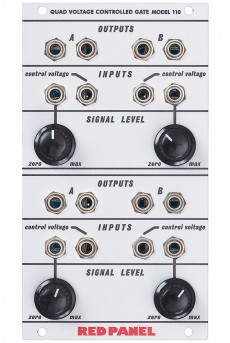 A single rail power supply and all transistor signal path create a VCA with character. Response is roughly exponential in the first 1/3 of its range, approximately linear over the middle 1/3, and increasingly logarithmic as it begins to saturate at the upper edge of it’s range. No vactrols are used in the 100 series gates allowing for an extremely fast response time and the ability to perform audio rate amplitude modulation.

Accurate recreations of the original 100 series modules.
Entirely discrete transistor based analog circuitry, all opamps (when used) are for eurorack level matching only.