Shipment delays... no Corona, just Indian customs in this case...

We are very happy to distribute the fine products of Animal Factory Amps, also think it is not so tragic to wait for fine gear a bit longer, however it seems that Aditya the maker was already asked by a few end customers if there are bigger issues at stake with his stuff being not available right now. The thing is, it has been stuck in customs for several weeks in India but should be here soon...

A few words from Aditya:

This is Aditya writing to apologize deeply for the delays in shipment of modules and pedals, mostly the Godeater Eurorack that everybody is so keen on that I can hardly keep up with production and testing.

The current delay that we are facing, to cut a long story short, is due to a complete breakdown of communication between Indian customs, the courier company and the local Customs Handling Agent. I am not sure where the problem originated, as the shipment was picked up on Feb 3, 2020 and has been lingering between courier and customs since then.

A basic summary of the issue is that customs requested three sets of (practically the same) documents for three different processes - one week apart from each other. The chain of communication is always Customs <-> Agent <-> Courier <-> Exporter. It is not a transparent process particularly since the CHA is only answerable to the Courier and not the Exporter.

Usually, all three sets of documents would be requested at one shot; this was not the case.

Whether Mumbai customs raised each flag separately, or the CHA updated the courier company a week apart every time, or the courier company updated us in this ridiculous manner - this I cannot say and will probably never find out, since no questions have been replied to clearly and the buck has been passed up and down the chain like a football.

To reiterate - there is no problem with the goods, supply or paperwork from our end, except that paperwork was requested from us and forwarded to authorities in a very haphazard, untimely manner. We have every paper either on file or ready to go in printed format because we try to stay one step ahead as far as statutory compliances are concerned.

It is ridiculous that we have so much red tape to deal with as exporters in India, and the process is slow and cost intensive. I apologize for any problem caused and wish this was a situation over which I had a degree of control or was within my sphere of influence to act upon. I've been following up every day on the status of our shipments, including getting a third party to intervene, and it's been a nightmare to just get someone on the phone at times.

Now for the good news:

The constant nagging and intervention intervention seems to have paid off, since I have been assured that the shipment is in clearing today and will be on its way shortly.

The other good news is that these processes need to be done only once, so that future shipments will be cleared immediately. Unless there is a drastic change in rules, this should be the first and last time that we encounter this problem.

Thank you for your understanding and patience, and again, my apologies.

Like its predecessors, the Harmonic Oscillator and the Complex Oscillator, Foundation Oscillator adds a completely new method of synthesis to the product line. Containing two unaffected waveforms (triangle and square) and three waveforms within the "Harmonics" section, a wide range of sonic possibilities are easily achieved with an easily digested, clear set of controls.

In this video, Verbos Electronics explores the "Timbre" and "Richness" of the Harmonics section. In short, "timbre" allows the three waveforms to cross-fade between Sine and their intended waveform (as the graphic suggests) while richness provides a new form of wave multiplying which has proven to give the effect of a VCO in hard sync.

Need a small case for traveling ? Check out the Black Box from Verbos Electronics or the Eowave Mini Case!

Did you try the new Verbos Electronics modules ? If not, check out the new Amp & Tone (2020 Version) and the Noise & Filter modules! 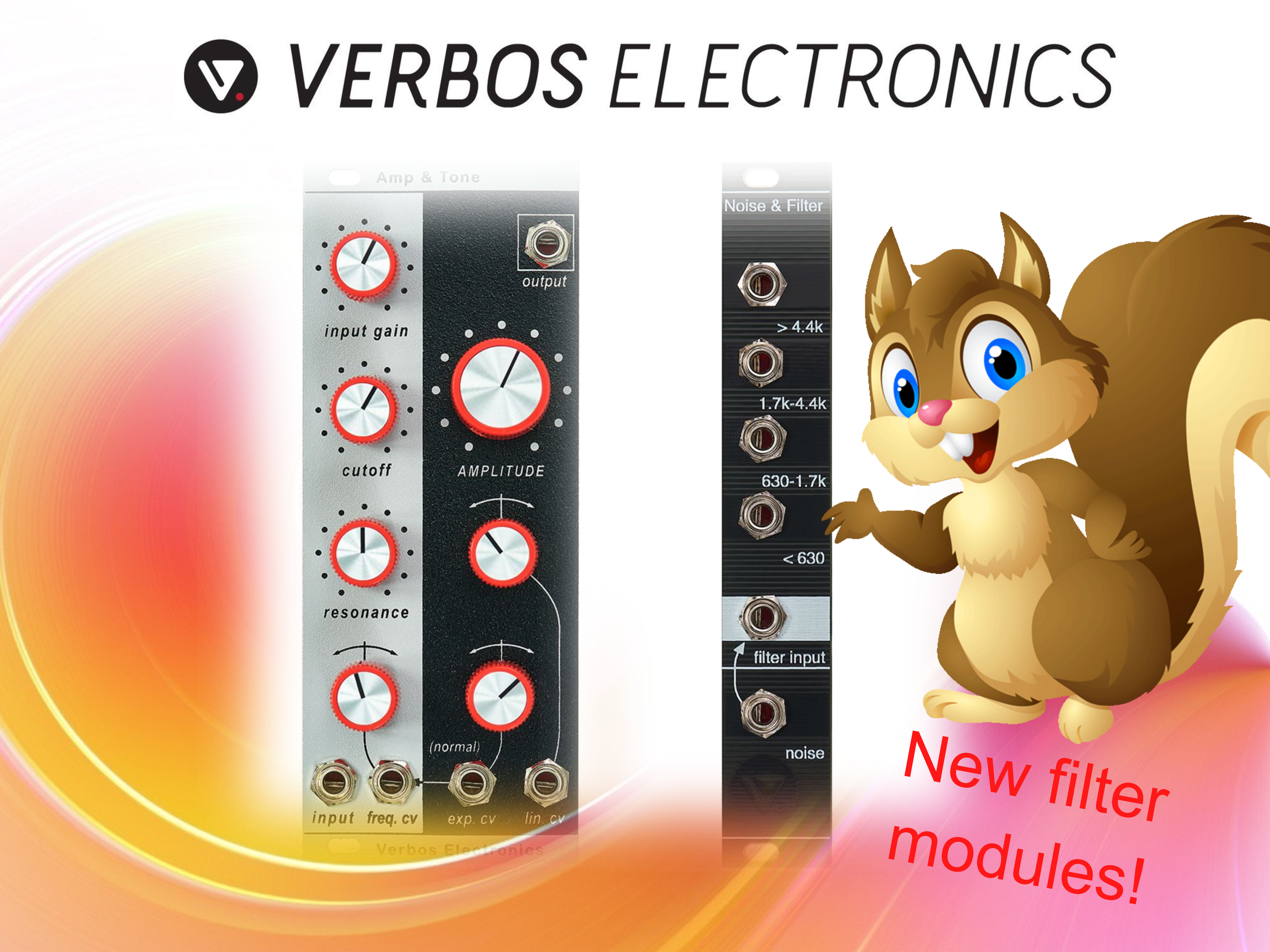 The Synthesis Technology E300 Ultra VCO is an analog oscillator based on the MOTM-300 5U module, with an updated design engineered in collaboration with Dave Rossum of Rossum Electro-Music.

The E300 uses modern temperature-controlled exponential converters without the expensive MAT-02EH + Tempco found in the MOTM-300. It also incorporates variable HFT (High Frequency Tracking) for a wider, more accurate 1V/Oct input. The SYNC circuit is a simpler hard sync type, with accurate detection of any waveshape/frequency used. There is an added -1OCT/-2OCT sub-octave squarewave output, which is phase-aligned with the sawtooth.