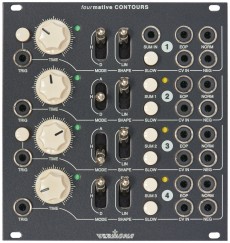 Fourmative Contours consists of four identical envelopes with positive and negative outputs. Each unit has a trigger input for firing the envelope. This is visualized by a green LED. The second and third units can also be triggered manually with the help of the trigger button.

The envelopes can work independently as attack, hold or decay curves, depending on the mode switch position. A second toggle switch allows the envelope to be switched between linear and exponential.

The Time potentiometer, paired with the Slow button, controls the speed of the envelope in a range from 0.5 ms to 37 seconds. This can be further shortened or extended by up to 2.5 hours using a control voltage at the CV input. The audio range can be reached effortlessly, allowing the module to work as an oscillator.

As soon as the envelope is finished, a trigger is emitted at the End Of Phase output (EOP). This makes it possible to transform the envelope into an LFO or to combine several units into a complex envelope.

Thanks to the Sum button, subsequent envelopes can be summed, which saves a mixer. The Sum input is used to include other CV signals.