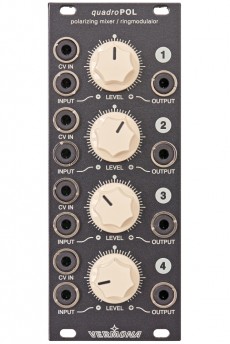 QuadroPol is composed of four voltage controllable attenuators, which can also be employed as inverters, ring modulators, VCAs or CV sources. Several channels can be combined to form a mixer.

QuadroPol comes equipped with four identical attenuators. Each of the circuits features an input, a potentiometer and a CV connector for adjusting the level as well as an output. With the knobs set to 12 o’clock position, incoming signals don’t get passed through the attenuators. The zero-point is very wide and therefore easily reachable.

By turning the potentiometers to the right, users can increasingly open the circuits. Turning the control elements to the left has basically the same effect, but with inverted phase. Thanks to the CV inputs, which have an operational range of -5 V to +5 V, the attenuators can also be controlled via other modules. This feature allows users to employ the circuits as VCAs.

The dynamic range is 80 dB. With audio material being fed to both the input and the CV connector of an attenuator, it works as a ring modulator. As long as no cables are plugged into the inputs, they get normalized to a fixed voltage. Using the level potentiometers, it is possible to shift the resulting CV signals in the range of -5 V to +5 V. The attenuators outputs can be interconnected via jumpers. As a result, it is possible to use the Quadropol as a mixer with two to four channels.