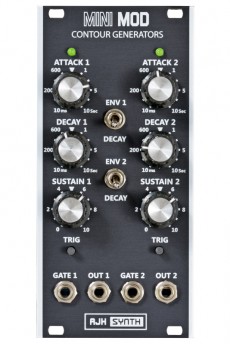 Two independent envelopes in one Eurorack module, which are accurate clones of the Minimoog's envelope generators.

Each unit can be used as an AD or ADSD envelope. AJH Synth stayed close to the original when designing the envelopes, even the internal operational voltages have been taken into consideration.
The retrigger behaviour of the transistor based envelopes is special, because when re-triggering the envelope, it didn't restart at 0V but at the momentary voltage. At longer decay settings the envelope got louder and louder, up to 10.5V.
The Minimoog envelopes had three parameters only: attack, decay and sustain. The release was switchable and its length was determined by the decay parameter. You could use them either as attack-decay envelopes or attack-decay-sustain-decay.
In the Dual Countour module this is selectable per envelope. The envelopes can be fired manually with buttons.