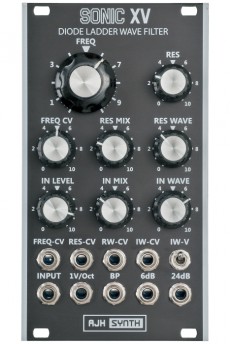 The Sonic XV Eurorack module is a four pole Diode Ladder Filter, featuring the circuitry and sound of the Musonics Sonic V synthesiser, which has a quite different character from transistor ladder filters. In addition to the regular 24dB Low Pass output there are a 6dB Low Pass output and a Bandpass output, along with full voltage control of the resonance.

Two waveshapers have been added to hugely increase the sonic versatility of this module. There is a breakpoint based wavefolder on the input, with drive level that can be manually adjusted or voltage contolled. A bias control switch allows extra waveshape variations.
A second waveshaper is connected to the resonance circuit, which adds distortion and waveshaping to the resonance loop signal, again the drive can be adjusted manually or under full voltage control. A wet/dry mix control allows resonance waveshaping to be added from 0 to 100%.
At high levels of feedback (between positions 8 and 10) the filter will self-oscillate and produce a sinewave output without any audio input, however the filter will only self resonate at higher frequencies (2KHz and above) unless the Resonance Waveshaper is used, in which case the self resonant level can be extended down to around 150 Hz. When the resonance waveshaping is used the resonance waveform is no longer a sine wave, the exact waveform depends upon the various Resonance control settings.

If a control voltage is patched to the 1 V/Oct input when the filter is self resonating, the resonance wave can be played in the same manner as a VCO with a tracking range of 3 - 4 octaves. The CV scaling is not temperature corrected so it may drift with changes in ambient temperature. Please also note that the tracking scale changes if the Resonance Waveshaper is used, by default the scaling is calibrated for waveshaped Resonance.

These additions take the diode ladder fllter core way beyond it’s original function, it becomes a “filter” module that can add harmonics and shape waveforms rather than simply filtering them.