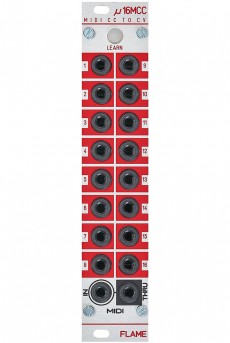 The Flame µ16MCC is a compact MIDI interface, which converts received MIDI control change commands on 16 outputs into CV voltages between 0 and + 5V. The resolution of the data bytes is 7bit. The outputs each have a passive lowpass filter, which smoothes the output voltages.

Each of the outputs can be assigned a separate control change number between 0 and 127 on its own MIDI channel. The module is programmable via the LEARN function with a MIDI keyboard and MIDI controllers, or via SYSEX commands. Some SYSEX files with default settings already exist.

The module has two MIDI sockets (mini jacks in TRS-B standard) INPUT and THRU. The data received at MIDI-IN is forwarded via MIDI-THRU. Additional MIDI modules can then be connected there.